Posted by Bong Redila at 9:39 PM No comments:

Ready for the show at Bear and Bird's Cinema Creep on October. I will be expecting a lot of blood and gore on this exhibit so I did something unpleasantly cute instead (at least that's what I think anyway). If you're familiar with the 1989 film "Pet Sematary" you know this scene.

Now that this is done, I can go back to my book project.

...and she thought it's going to be a perfect night.

I am so excited to announce that I just created another blog and it's called "Fables in Melag". The new blog will contain all sorts of short stories in comics form that I will be doodling from my sketchbook or maybe from anywhere and any material that I might be using. So please do visit it for any updates at
http://fablesinmelag.blogspot.com/

In the meantime, remember the blog that I posted months ago about "Late Night Ballet"? (>>please check here) Well, here is a sneak peek on that children's picture book that I am currently working on. I am now halfway on finalizing all the sketches and hope that I will be starting to paint next week though I am still contemplating on whether to do it in ink or watercolor. 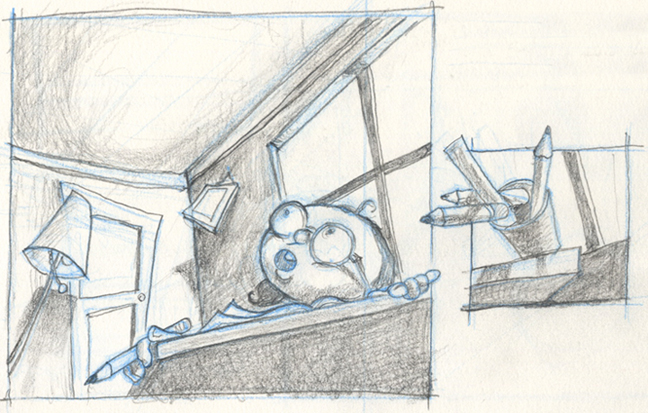 "Why think about that when all the golden land's ahead of you and all kinds of unforeseen events wait lurking to surprise you and make you glad you're alive to see?" - On the Road. Jack Kerouac
Posted by Bong Redila at 8:54 PM 5 comments:

When little boy Pepe rode a boat to cross Laguna Bay, he accidentally dropped one of his slippers and was immediately swept away by the strong currents. Instead of crying, Pepe intentionally threw the other slipper into the water. The father asked him why did he do that? The young Jose Rizal said: "A slipper is useless without its mate."

Posted by Bong Redila at 7:13 PM No comments:

Sketchbook: "The Arrival of Captain Favian and His Latest News"

Posted by Bong Redila at 7:00 PM No comments:

I - Coffee Shop
Eight months ago I met Kim Pham thru an online ad she posted somewhere. At first I was hesitant to reply to her email because when I tried Googling her name something 'horrifying' information came out (yeah, you try). But I made a gamble to meet with her in person anyway and the best and safest way was a rendezvous in a public place.

I really dread to say it but I'll say it anyway, Starbucks. "Why in the world did I choose Starbucks to have a business meeting? You know you've always thought that that's where those poseurs, wannabe authors, pretentious artists and rich frappucino lovin spoiled brats hang out. Why can't it be that cuban cafe down that corner over there where an old hobo making love to a true monster of a caffeine with his nicotine-stained mouth while holding a newspaper, the real mccoy of wireless, laughing at a Doonesbury?" -- > That's me by the way talking to myself when I was driving to get to the multi-billion dollar enterprise coffee shop to have a business meeting with a person whose name terrified the hell out of me when I googled (yeah, I'm telling you! google it!)

Well, it turns out Kim is actually a wonderful young and smart lady.

II - The Family
Kim Pham and her sister, Thuong (I call her T), started Pham Kids, LLC, a children's book family-owned company whose main goal is to come up with a series of interactive book apps with a core purpose of educating children, boost their creative brain at an early age by encouraging them to ask questions, generate their own ideas, and use basic critical thinking to solve problems.

With T as the producer and the main writer of the books, Kim as the co-producer, Ngan Pham as the editor and animator, Lee Pham on marketing, Mr. Loc Pham (the father) in software development, everything was ready and all the seats were taken except for an illustrator. That empty seat is where I, a non-Pham, sat and joined the ride on a trip to Humonkee.

First sketch of Humonkee.
III - Illustrating Dylan Monkey & Squishy Face
Dylan Monkey & Squishy Face are the two main characters of the interactive app that the Pham sisters created. It is mainly based on T's two sons, Dylan and Dustin, and her everyday adventures with them. You can read more about the inspiration behind the book by reading the writer's article HERE. -->> http://www.dylanmonkey.com/inspiration.htm

The process of illustrating the book was so much fun for me especially when I did the watercolor textures since I have a borderline obsession with paint textures - most especially the free flowing textures of a water in watercolor, ooohh. Unfortunately for me they decided not to use the watercolor skies that I did and used a real photograph of blue skies and clouds instead.

Doodling, doodling, doodling. That is the first step that I do after reading a scene and finding the right feeling and emotion of what the line is saying on that particular page. After finding the right positioning of characters and how they should act and interact with each other in a page I will then fine tune a cleaner sketch of the very rough drawing and repeat the process on to the next page until all the sketches for the entire book are done.

IV - Layers and Layers...
Approved sketches were then line drawn in Photoshop making sure all characters and stage props were in a separate layers. And since the characters had to be animated their eyes, heads, tails, limbs and so on had to be in a separate layers as well. Multiple keyframes for movements were an additional layers too. Not to mention each and every texture and colors are in each layers.

The final illustration goes to Ngan who does the beautiful animation and then finally goes to Mr. Loc, the wizard that made the interactive app work perfectly stable so children will enjoy and won't have difficulty playing around with it.

So without further adieu, you may see the final result at Pham Kids website and let your funny kids enjoy a funny app.

I would like to THANK the Pham family for giving the opportunity to work with them on this project.

Last week I have been staring at this painting, Late Night Ballet, for days and just last Monday a light bulb popped out from my head with crystal clear "ting!" sound. I grabbed my notebook and pen then began writing a new children's book. This time the story is based on this watercolor piece.
Like The Dewgazer and the Dewdrop Fairy it will be written in Lyrical Ballad for children, sort of a long Nursery Rhyme. At this moment I am in the process of editing the rough draft and hopefully start illustrating this weekend.

Posted by Bong Redila at 3:52 PM No comments:

Where were they when I wanted to join them?

Posted by Bong Redila at 9:52 AM No comments:

A long time ago a kid told me, while he was out alone hunting for birds in the wild with his slingshot, someone poked him in his back before he heard a giggle.